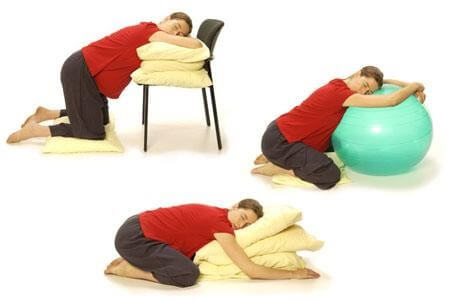 Pain during labor is a given, and some women choose to forego anesthetic intervention to improve chances of a normal birth for their baby. As a result, there is a need for pain-relieving measures that are non-pharmacological in order to mitigate and manage the pain. One such measure is the birth ball (aka Swiss Ball), which was introduced as a tool for childbirth in 1980. Other than a means for reducing pain, the birth ball is integrated into labor as a tool for improving a woman’s self-efficacy, or the belief in herself throughout the labor process.

A study was conducted in Taiwan to determine the effectiveness of birth balls on pain reduction and improving self-efficacy. Prior to labor, the women in the study were required to practice a set of exercises with the birth ball at home three times a week for six to eight weeks. They were given a birth ball of either 55, 65, or 75 centimeters in diameter, which was based on their height. The women in the experimental group were then given a birth ball to use during labor when the time arose.

The birth ball not only aides a woman in obtaining the optimal position for pain reduction during contractions, but it also helps her to build an awareness of her body. It incorporates an element of play, which leads to positive associations during labor. Four positions and eight exercises in total were utilized by the women. The four positions include sitting, standing, kneeling, and squatting. The birth ball supports the perineum and lower back of the woman without pressure, and the act of rolling on the birth ball stimulates somatosensory input to the projector neurons which in turn decreases pain perception.

The study found that incorporating the birth ball into labor decreased labor pain, as none of the women sought anesthetics, and it also increased self-efficacy. The women spent a longer time in the upright position during labor, and those who reported higher self-efficacy also reported lower pain. With the use of the birth ball, women were granted freedom of movement which not only lessened their pain, but also increased their comfort and likely aided in fetal descent. Thus, it can be concluded that the incorporation of a birth ball into labor aides in the mitigation of pain and increases a woman’s positive image of herself completing the labor process.